Happy Halloween! For me this year (2017), it’s more of a “meh” Halloween. I’m doing the old fuddy-duddy thing of turning off the front light and hiding in my man-hovel so I can write. Hardly any kids come to my house anyway, even when I made the effort to really decorate it. I suppose living on a dead end street is a factor for low turnout.

And Halloween is my favorite holiday. Last year I got the opportunity to work for a haunted house making props, painting a facade, and being a scare actor. Here are some of my creations:

The Museum of Death – Yes, there is such a place, actually, there are two Museums of Death, one in Los Angeles, and one in New Orleans which I visited February, 2018.   Museum of Death, Nola .  It’s definitely worth checking out, and not for the faint of heart. I didn’t take any pictures, as none are allowed inside the museum, but several things remained in my mind: the silver painted celebrity death masks, the cannibalism section, various items concerning serial killers, and the movie looping in the small back theater. It’s like “Faces of Death,” only everything on there is real, oddly juxtaposed with a cartoonish/Ragtime soundtrack. I can still see the woman who is unaware of the train coming down the track. This museum is as disturbing as you might expect, but such is life, and part of life is death. 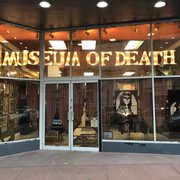